A LAWYER who was groped from behind by a long haired creep during an early morning walk through East Melbourne has urged her attacker to hand himself into police.

Gemma, 31, was attacked as she listened to meditation music at 6.30am on November 19.

The assault happened by a road and police are hopeful drivers in the area may have dash cam footage of the suspect.

Gemma, who asked for her surname not to be published, was walking toward Fitzroy Gardens on Eades St when she noticed a man following her.

She stopped at the Albert St intersection when the man sexually assaulted her from behind.

“It was a beautiful Sunday morning so I went out for a walk,” Gemma said.

“Just to get some exercise and to relax.

“As I was walking down towards the gardens I noticed a man was following me.

“He kept following me. I stopped near the road because there were cars there. He then assaulted me.”

A woman has spoken out in a bid to find her attacker.

Gemma screamed at her attacker, who then ran off through Fitzroy Gardens.

“I was scared and emotional at the way he rushed at me,” Gemma said.

“A person driving past stopped and assisted me.

“I think it is very concerning somebody would do this in broad daylight. We should all be able to feel safe to walk in our city. It has made me incredibly angry and not feel safe.

“Initially I was terrified and found myself avoiding men. But I was determined to overcome that anxiety. It has made me a lot more cautious and cynical about people I encounter out and about.

“My message to him would be to please do the right thing and come forward to police.”

“We want the public to help with this investigation,” Sen Con Knight said.

“Even though it was a Sunday there were a lot of people out walking and doing their morning rituals around the park or driving so I believe somebody may have seen this male.

“We have released an image of the male.”

Police have released this image of a man wanted over an East Melbourne sexual assault.

The offender has been described as caucasian, with thick and long mousy brown hair, about 180cm tall and of average build. He also has a very distinctive nose.

Police believe he is aged in his 20s and was wearing a blue shirt at the time of the assault.

“It is concerning given the location and time of the day and the brazenness of the attack given there were a lot of people in the area,” Sen Con Knight said.

Anyone with information is urged to contact Crime Stoppers on 1800 333 000 or submit a confidential report at crimestoppersvic.com.au. 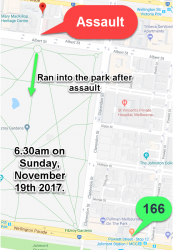